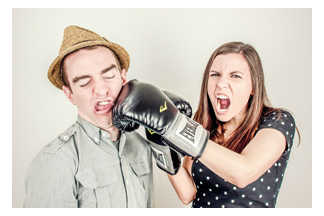 What might you imagine is one of the biggest stressors that convince people to seek counseling? Is it fear of death, disease, or unemployment?

Actually, it’s a fear of being seen as selfish and therefore, being disapproved of. It’s the conflict between knowing in your deepest self that someone is taking advantage of you, treating you disrespectfully, or otherwise ignoring your needs, and your fear of speaking and acting differently in order to address that person. (NOTE: A physically abusive situation is dangerous and is not intended to be addressed here.)

Sometimes we don’t speak up because we don’t know how to do so in an appropriate way. After all, where do we learn how to communicate, how to be an adult? From watching our parents—and who taught them? The end result is that most people find themselves communicating either passively or aggressively—and neither will bring the desired results. Stress and tension only build in your life when these are used.

The Sighs Say it All…

We feel we are somehow responsible for the other person’s misbehavior (“what did I do to make them act that way?”) instead of remembering that EACH of us is responsible for our own actions.

Sayings like “if you can’t say anything nice, don’t say anything at all” feed the passive style. A belief that feeling angry is wrong makes many people so frightened of this emotion that they suppress it rather than express it in healthy ways.

Look Out! Here Comes The Unloading…

The aggressive style is often dangerous. This person might:

They tend to unload their anger at the world directly onto you. If you bring up any frustrations or needs of your own, they quickly launch an offensive attack, telling you that you are “wrong” to feel that way. You are told that “you’re just too sensitive” often enough that you finally begin to believe them and tune out the voice of reason inside you.

The aggressive style is powerful and we often allow aggressive people to get what they want, simply because it seems to take too much energy to “rock the boat”, or we don’t believe we have a right to do so.

So how do we need to communicate to keep the stress levels down in our lives? By stating our needs:

Although the people around you will have to adjust to your new communication style, the end result will be less stress and more respect– both self-respect and from others.