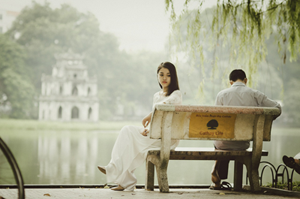 2. Jealousy: Excessively possessive: calls constantly, visits unexpectedly; prevents you from going to work because “you might meet someone:” checks your mileage

3. Controlling: Interrogates you intensely, especially if you’re late, about whom you talked to and where you were. Keeps all the money; insists you ask permission to go anywhere or do anything.

4. Unrealistic expectations: Expects you to be the perfect woman and meet his every need.

5. Isolation: Tries to cut you off from family and friends; accuses your supporters of “causing trouble;” deprives you of a phone or car.

6. Blames others: for his problems and mistakes: The boss, you—it’s always someone else’s’ fault.

7. Makes everyone else responsible for his feelings: says, you make me angry” instead of “I AM angry,” or, “you’re hurting me by not doing what I tell you.

8. Hypersensitivity: Easily insulted, claiming his feelings are hurt when he is really mad; rants about things that are just part of life.

9. Cruel to animals or children: kills or punishes animals brutally; expects children to do things that are beyond their ability, i.e. whips a two year old for wetting a diaper; teases children until they cry. SIXTY FIVE PERCENT OF ABUSERS WHO HIT THEIR PARTNER WILL ALSO HIT CHILDREN.

10. “Playful” use of force during sex: enjoys throwing you down, holding you down against your will; says he finds the idea of rape exciting.

12. Rigid gender roles: expects you to serve, obey and remain at home.

13. Sudden mood swings: switches from sweetly loving to explosive in a matter of minutes.

14. Past battering: admits hitting women in the past, but says they made him do it or the situation was to blame.

15. Threats of violence: makes statements like “I’ll break your neck” or “I’ll kill you,” then dismisses it with “everybody talks that way, you’re too sensitive” or “I didn’t mean it.”

IF IT HAS COME THIS FAR, GET HELP OR GET OUT.

From the Project for Victims of Family Violence, Lafayette, ARK