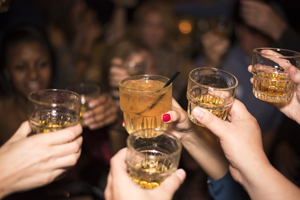 Have you ever wondered if, or been told that, you drink too much? Contrary to popular opinion, there are standards by which professional therapists measure and diagnose whether or not your use falls into troublesome levels. These standards are based on research produced by the National Institute on Alcohol Abuse and Alcoholism.

It’s not just drinking daily– if it’s no more than 1 daily drink a week for a woman and two for a man, it’s generally not considered problematic—but also HOW MUCH at one time. So, even if you only drink once a month, IF you drink in excess of more than 4 drinks for a man or 3 for a woman in one day, you can be considered alcohol-dependent, have alcohol related problems, or be at risk. Medical, behavioral, and family history will all be taken into consideration. Further testing, such as the SASSI (Substance Abuse Subtle Screening Inventory) may be done by your therapist.

Fill out this form below and submit to your therapist for further evaluation. Take that first step toward your best YOU!

Have you ever had a drink first thing in the morning to steady your nerves or get rid of a hangover?